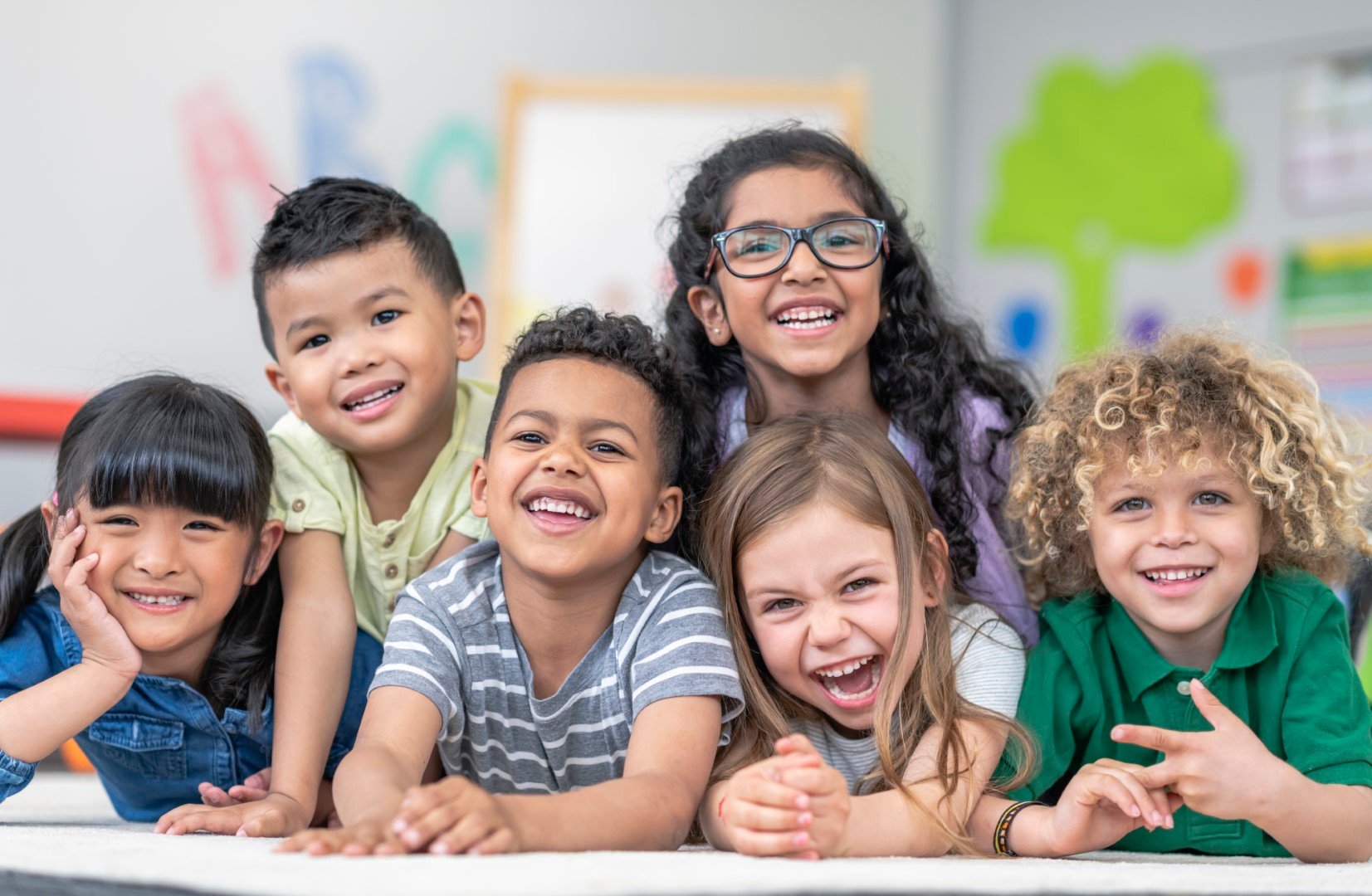 Emmetropisation is a process by which the components of the eye change/develop to achieve the ideal refractive state where vision is optimal for far objects.1 In human newborns, the refractive state of the eye is that of hyperopia of approximately +2.00D; this hyperopia reduces in magnitude over time until the eye becomes emmetropic. It is said that eye growth is rapid in the initial years, with the eye achieving 90 percent of adult proportions by the age of  3-4 years; after that, the growth decelerates and continues at a slower pace until around 6-8 years.2 The changes in eye growth involve all the major determinants of refractive power, including corneal curvature3, axial length4, and the crystalline lens5 (see Figure 1).

It is said that eye growth is rapid in the initial years, with the eye achieving 90 percent of adult proportions by the age of  3-4 years; after that, the growth decelerates and continues at a slower pace until around 6-8 years.2 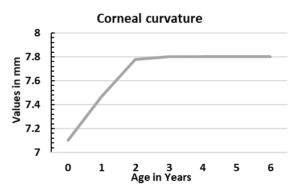 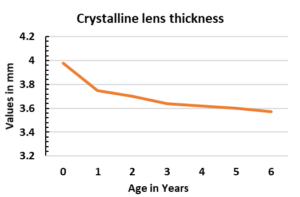 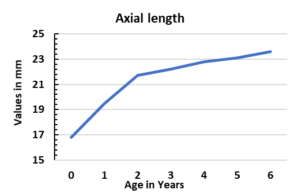 The cornea averages 49.00D at birth and loses refractive power with age as a result of the cornea flattening.6 The radius of curvature of the cornea changes approximately from 7.1 mm to 7.7 mm in the first year of life and 0.1 mm in the second year before reaching adult eye dimensions.

With respect to axial length, the length of a newborn is 16.8 mm and is found to increase by approximately 3.9 mm in the first two years of life, then 1.2 mm between the second and the fifth year, reaching 23.6 mm in the early adult years.4,7

Given that the cornea appears to play little or no role in the process of emmetropisation after infancy and early childhood, the main ocular components responsible for differences in the emmetropisation process are thought to be the axial length and the crystalline lens.

It is known that there are some racial and ethnic anatomical differences in the ocular structures. Between Asian and Caucasian/white children’s eyes, Asians eyes have smaller anterior segments (corneal diameter, corneal curvature, and anterior chamber width) than Caucasian eyes.12,13 There have not been many studies that have directly compared emmetropisation in Asian and Caucasian eyes. A multi-ethnic study conducted in 2013 in children aged 6-72 months revealed that myopia was relatively more prevalent among Asian children compared to Non-Hispanic white children.14 Also, hyperopia was the most common refractive error in both Asian and Non-Hispanic white children.14 This indicates that there may be differences in the active and passive mechanisms, or as has been suggested for myopic refractive errors, there may be significant environmental influences at play. Irrespective of the mechanism, it may be that an Asian eye will demonstrate more rapid growth than, for example, a Hispanic eye.

So how to determine if ocular growth is normal or not? Monitoring refractive error and axial length change may indicate if a child is progressing faster than age indicated norms. In this regard, measurements of axial length with interferometry are more accurate, as indicated by repeatability measurements (axial length change 0.12 µm versus subjective refraction ±0.50D). In this regard, it appears that there now seems to be some data for age-dependent normative data/percentiles curves for axial length.15,16,17 Comprehensive percentile curves are yet to be available, but a summary of specific percentiles is provided in Table 1 published at http://reviewofmm.com/the-gold-standard-monitoring-myopia-progression-via-measuring-axial-length/. Such percentile curves serve to indicate if eye growth is rapid or excessive, may indicate future risk of onset or progression of myopia (depending on the baseline refractive error state), and may aid clinicians with an appropriate management strategy.